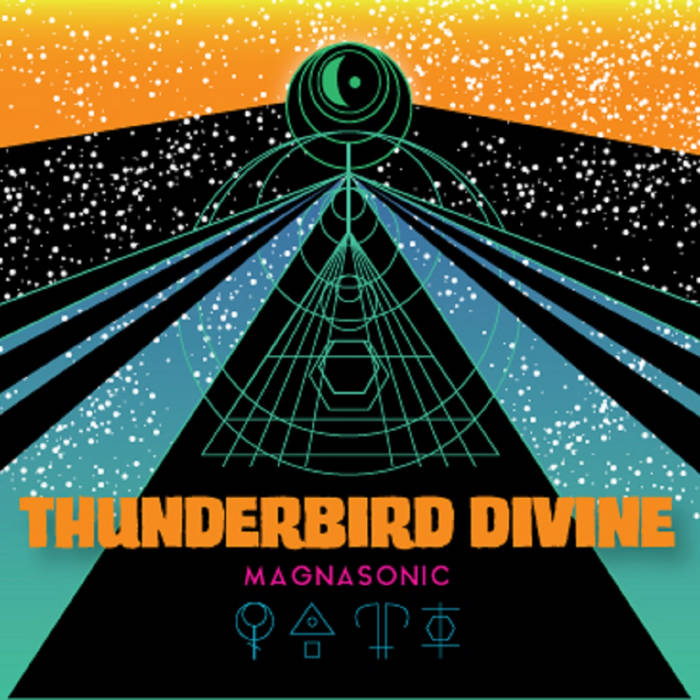 ΛΔΛΜ Imagine if you will... the fuzz of "Fu", the candor of "Clutch" and the muscle of "Magnet". Cohesively coherent and thoroughly thick.
Favorite track: Qualified.

Bucky Magnasonic not only plows us with hard charging distortion, but emits a cloud of multi-dimensional fuzz boosting its impact into divine territory. The layers of surprise buried deep within the heavy block of steel riffs thrust with cosmic force and plutonic origin.

Thunderbird Divine's "Magnasonic" is its first official recording. The band's four members, Erik Caplan, Mike Stuart, Flynn Lawrence and Adam Scott, joined forces in March 2017, and this collection is the fruit of their union.

Drawing influences from both standard and diverse sources, Thunderbird Divine wrangled instrumentation uncommonly used in rock's usual vernacular, such as marxolin, mandolin, synthesizers and other oddities to create unexpected tones mixed with classic arrangements. The result is music with depth and textural complexity not usually experienced with a band's first outing.

Recorded by Ted Richardson (TedAudio-- www.facebook.com/TedAudio) and Charles Newman (Cottage Sounds-- www.facebook.com/cottagesounds/) in Philadelphia and Brooklyn respectively, "Magnasonic" shows a band unafraid to experiment with sounds without abandoning the essential nature of hard rock and psychedelia.

The album was mixed by Charles Newman, who had unenviable task of balancing a multitude of sometimes divergent sound sources to create these solid, creative and sonically dense songs.

Released on CD format by Connecticut's Salt of the Earth Records (www.saltoftheearthrecords.com), "Magnasonic" has truly been a voyage and labor of love.

Andy Martin: Lead/backing vocals on "Qualified" and "The Devil's Hatband"

Kermit Lÿman III: Lead/backing vocals on "Qualified" and "'Til Shiloh"

Brittany Marie & Avalicious: Backing vocals on "Qualified," "'Til Shiloh" and "The Devil's Hatband"

Thunderbird Divine comprises four Philly rock veterans who came together in March of 2017 to collaborate and create riff- heavy psychedelia/stoner/doom in the spirit of artists like Monster Magnet, Hawkwind, Flower Travellin' Band, The MC5, Grand Funk Railroad and many more.

Look for the CD version of "Magnasonic" on Salt of the Earth Records.

Bandcamp Daily  your guide to the world of Bandcamp